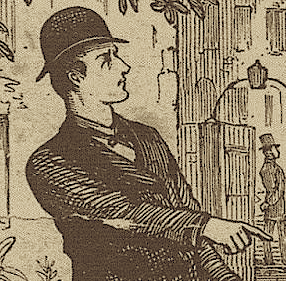 ‘…An Exemplary and Reliable Example of
Thorough and Definitive Scholarship…’

THIS definitive bibliographic history of British boys’ periodicals is something I have been looking forward to since I first heard it was in the works. Robert J. Kirkpatrick is no stranger to Yesterday’s Papers and has two previous bibliographic works to his credit. Beaks, and Flannelled Fools; An Annotated Bibliography of Boys’ School Fiction 1742-1990 (privately published in 1990 and 2001), and The Encyclopaedia of Boys’ School Stories (published by Ashgate in 2000).

His new, just published, From the Penny Dreadful to the Ha’penny Dreadfuller is a fat book, 576 pages long and profusely illustrated with full-color and black-and-white cover illustrations from the original Victorian boys’ periodicals. It is expensive, as these academically published works are wont to be, but I have found most universities and many public libraries are open to purchasing suggestions from their members.

The complex text outlines the boys’ periodical from its origins as teachers of virtue, cleanliness, temperance and religion to the rise and subsequent domination of the boys’ comic weekly by the 1950s. Included are biographies of authors, artists, editors, proprietors and publishers — most never identified in print before.

His exhaustive research is supplemented by an alphabetical and a chronological checklist of boys’ periodicals and a checklist of juvenile periodicals as well as a substantial bibliography of books, magazine articles, dissertations and web material for further reading. The indexes are searchable by title or author/publisher names and pseudonyms. Titles covered range from successful periodicals like The Boys of England and Chums to the short-lived ephemeral titles Boy’s Telegram, Glasgow Young Men’s Magazine, and Gramol’s Thrillers. Kirkpatrick records some interesting titles from the mistier byways of storypaperdom.

Less than ten years ago the myriad producers of the penny bloods, penny dreadfuls and story papers were forgotten. Much of what was known was based on second hand accounts, and some information was deliberately misleading. This year, From the Penny Dreadful to the Ha’penny Dreadfuller is an exemplary and reliable example of thorough and definitive scholarship and the first bibliography to ever outline the whole of juvenile periodical publishing, virtuous, comic and sensational, in England (and a section on the United States) in such minute detail. 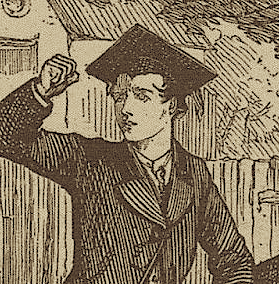 ‘…An Impeccably Solid and Readable Study…’

BRITISH boys’ periodicals have always been something of a mystery to American students of popular culture. A few books on the subject have appeared in the past, notably E.S. Turner’s Boys Will Be Boys (1948), Peter Haining’s anthology, The Penny Dreadful, Or, Strange, Horrid & Sensational Tales (1975), Michael Anglo’s picture book of Penny Dreadfuls and Other Victorian Horrors (1977) and Elizabeth James’ & Helen R. Smith’s Penny Dreadfuls and Boys’ Adventures; The Barry Ono Collection of Victorian Popular Literature in the British Library (1998). These either concentrated on a few particular topics, or else rambled on in a nostalgic vein about the vanished cheap periodicals of the 19th and early 20th centuries.

Finally, an impeccably solid and readable study of the entire complex world of the British boys’ periodical is now available. Beginning with the earliest chapbooks and magazines for ‘young gentlemen’ in the 18th Century, Robert J. Kirkpatrick traces the production of juvenile periodicals from the rapid advances in papermaking and printing, through writing, publishing and distribution. He focuses on major and minor publishers, famous and obscure authors and the surprising magazines published at several public schools. Drawing on his years of research in primary sources and his two earlier books, the present sumptuous volume distills an incredible quantity of material into a logical and entertaining narrative of British boys’ fiction and the personalities who produced it.

By the mid- to late 19th Century, juvenile periodicals were available to suit all social and economic classes, ranging from tastefully printed and bound annuals for the wealthy, through middle-class magazines, such as Beeton’s Boy’s Own Magazine, down to the sensational penny ‘bloods’ and boys’ journals that featured highwaymen and pirates at a halfpenny per installment. During the late Victorian years and beyond, the school story and the exotic adventure yarn became the dominant staples of boys’ popular literature, appealing to all classes. ‘Billy Bunter, the Fat Owl of the Remove,’ and legions of fictional schoolboys populated scores of magazines like Gem and Magnet. Endless colonial brush wars, two world wars and the development of aviation provided inexhaustible story material as well. ‘Biggles’ and his comrades flew through countless story-paper missions against the minions of Kaiser Bill, Adolf Hitler and the ‘yellow peril.’ 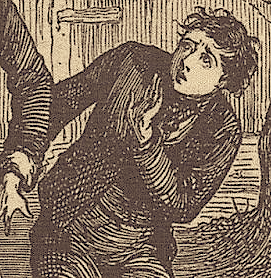 This hefty 2013 volume (about the weight of two house bricks) is divided into eleven chapters, covering: Early Juvenile Periodicals; Middle Class Periodicals for Boys, 1800-1870; Edwin J. Brett; The Emmett Brothers and Charles James Fox; Ralph Rollington, Guy Rayner and William Lucas; American Story Papers, the Dime Novel and the Aldine Publishing Company; Early Counterattacks: The Boys Own Paper and Others; Lesser Publishers of Boys’ Periodicals, 1870-1900; Public School Periodicals – George Newnes and The Captain; Alfred Harmsworth and the Amalgamated Press; Harmsworth’s Competitors, 1900-1950. A lengthy introduction and three appendices — an alphabetical checklist of boys’ periodicals, a chronology of boys’ periodicals and a checklist of juvenile periodicals — tie the chapters together. Each chapter includes lists of periodicals issued by the publishers dealt with in the narrative. Kirkpatrick ’s ‘scholarly apparatus’ is abundant — footnotes, a comprehensive bibliography, an index of titles and an index of names.

As an added treat, the book has sixteen pages of full-color plates and a hundred black and white cover illustrations plus portraits throughout the text. American dime novels are well represented, both in the illustrations and in Chapter Six. Not only were many British ‘penny dreadfuls’ pirated and reprinted in dime novel publications, but a large number of American tales found their way into the pages of The Young Briton, Boys of London and Boys of New York, and a variety of pocket-sized booklets from the Aldine Publishing Company. Aldine reprinted dozens of stories from Beadle and Adams series, the Frank Reade, Jr. techno-fiction tales from Frank Tousey weeklies, many of the Horatio Alger, Jr. books, and other familiar dime novel and story-paper serials such as Deadwood Dick and Buffalo Bill.

Robert J. Kirkpatrick is the author of important earlier books on the subject (as John already mentioned above); he also worked as a welfare benefits adviser, a subject about which he wrote books too. Besides, he is a long-standing member of the Children’s Books History Society, and a regular contributor to the Society’s newsletter as well as to newsletters from other literary societies.

This study will easily become the standard reference in the field for decades to come. In content and design it takes its place alongside Albert Johannsen’s three-volume The House of Beadle and Adams (University of Oklahoma Press, 1950-1962). 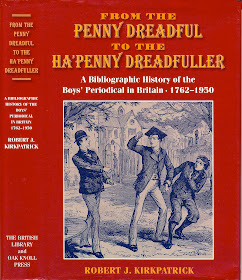