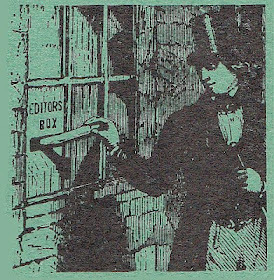 It is an unwritten law of research and publishing that no sooner have you ‘finished’ a project, and published it, than you discover something you missed. This is the case with my From the Penny Dreadful to the Ha’penny Dreadfuller (warmly reviewed here last month). Not long after I received the first printed copies, I stumbled across a ‘new’ title, owned and edited by Vane Ireton St. John. The details, should anyone wish to annotate their copy, belong in Chapter 8.

VANE IRETON ST. JOHN was one of the most active writers for boys’ story papers in the 1860s and 70s, although he was also one of the most impecunious, frequently in debt and struggling to provide for his large number of children. After beginning his writing career contributing to adult periodicals such as Reynolds’s Miscellany and Every Week, he turned to writing for boys, contributing the serial Who Shall be Leader? to the opening numbers of Edwin J. Brett’s Boys of England in 1866. After several more serials for Brett, he began writing for the Emmett brothers, with serials appearing in Sons of Britannia, Young Englishman and Young Briton. In 1879 he began writing for the Boys’ World, which John Allingham had launched in April of that year.

This was Allingham’s first venture as a publisher, and its early success may well have prompted St John to try his own luck. The result was Sons of Merry England, a 16 page one penny weekly launched on 18 September 1880. It was ‘Printed and published for the Proprietor (Vane St. John) by Hackett & Son, at their office, 4 Pemberton Row, Gough Square, Fleet Street.’ The masthead proclaimed it as a ‘New Journal for Boys,’ ‘conducted by Vane St. John.’

The opening serials were Hal Strongarm, or The Keeper of the Gate by Vane St. John, The Bad Boy Jack, or Forced to be a Sailor by Charlton (i.e. Henry Emmett), Happy as a King, or St. James and St. Giles at School (anonymous — by the author of Poor Jack, the London Street Boy etc.), and Journeying Jimmy and Tramping Tommy; The Travels of Two Truant Schoolboys from London to Manchester by Edwin Greenwood. Other material included a feature called Our Boys’ Garden by Tom Jerrold, and Mottoes of Our Noble Families and How They Were Won; No. 1 The Night Riders, or The True Origin of Buccleuch.

Future serials, as announced on the last page, were to include Drums and Guns, or The Fortune of War by One of the 64th; Tom Blake of the 90th, or The Fighting Boys of Clare, an Irish story by the author of ‘Pat O’Connor’s Schooldays,’ ‘That Larry of Ours,’ etc; For Liberty and Fame! Or A Fight for Vengeance and a Crown, by the author of ‘The Student Cavalier,’ ‘The Man at Arms,’ etc; The Mariners of England, or Hurrah for the Union Jack, by the author of ‘Chevy Chase,’ etc; and Red Ronald of the Moor, a Scottish Romance by the author of ‘Wallace, the Lion King of Scotland,’ ‘Rob Roy,’ etc.

In his editorial, on page 16, Vane St. John wrote:


For the last twenty years I have tried to instruct and amuse you in the pages of most of the journals of the day, and I hope my efforts have not been without some measure of success. At last, I have launched my own little ship upon the tide of public opinion, and, I firmly believe, the confidence you have so often given me in the ventures of other publishers, will not be withdrawn, now that our ship, the Boys of Merry England, spreads her canvas to the wind of your favour. I have gathered around me a staff of authors of acknowledged repute in the world of literature. Most of them you already know, and they will unite with me in placing before you, week after week (and, may I hope, year after year) tales and stories of adventure, of daring courage, of heroic example to the rising youths of our Merry England. In addition I shall give space to instructive essays upon all sports and pastimes indigenous to our land, as well as useful information in husbandry, trade and commerce.


AS WELL AS the future serials listed above, the paper also carried an announcement for a ‘Grand Prize Football Challenge Cup.’ It also carried an advertisement for Readable Books for Boys, published by A. Ritchie & Co., the first issue being Captain Tom Drake, or England’s Hearts of Oak. This is something of a mystery — no copies of this appear to have survived, although George Emmett, operating out of 5 Goldsmith’s Row, London, launched a paper with the same title in 1881, although this only appears to have lasted for one number.

Every issue of the first number of Sons of Merry England had a prize ticket attached to it, alongside an announcement of a forthcoming draw with 500 prizes. These included 20 silver watches, 40 footballs, 25 model yachts, 25 model steamboats, 50 pairs of gold cufflinks, 50 gold chains, 25 pairs of pigeons, and 24 cricket bats. The copy held by the British Library has ticket no. 36,417 stuck to the front page, suggesting a print-run of at least around 40,000.

But whether or not the prize draw ever took place — or, indeed, if the prizes had even been bought by St. John — is not known. It is not even known if the paper lasted for more than its first number, the British Library only having the one issue. What is known, however, is that in 1910 St. John made an application to the Royal Literary Fund for financial help, in which he stated that he had sold Sons of Merry England to John Allingham, who had merged it with the Boys’ World. However, it is not possible to verify this — there was no reference to a merger, or to the continuation of any of the serials, in the Boys’ World between September and December 1880. (Unfortunately, the British Library has no further copies of it until 1883).

Vane Ireton St. John soldiered on as a writer until his early 60s. He was then obliged to make the first of what turned out be several applications to the Royal Literary Fund in December 1901, when he said that his only income was £1 a week from Sketchy Bits, published by Charles Shurey for whom he had been working since 1895, at one point editing his boys’ story paper Pals. St. John subsequently made six further applications to the Fund, being awarded a total of £140, until his death in 1911. One further claim was made by his widow, in January 1912 — she was awarded £40.