When Strips Were Worth Promoting. 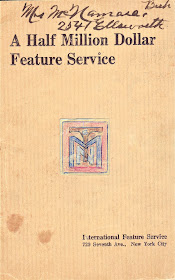 A Crowded Life in Comics inevitably has led to crowded bookshelves, cabinets, file drawers, attacks, basements, and eight storage units. Not all comics and cartoons; I have other interests and hobbies to keep me bankrupt.

Among my specialties-within-specialties is syndicate promotions – brochures for new strips; posters; industry press releases; surveys; special artwork. We can trace history through such artifacts – for instance, start-dates or information about strips that never launched. And myriad interesting facts. King Features originally announced Harold R Foster’s new page about the days of King Arthur – Derek, Son of Thane. A major sales pitch for Li’l Folks was that its simplicity and four template panels would enable newspapers to stack two rows of two panels, and make a square that would fit neatly among the classified advertising pages. I never did see the strip buried in that fashion. It launched with a scant 17 newspapers, and might have been lost forever. As a strip, and re-titled Peanuts, it did OK. But the early promotion is amusing in hindsight. 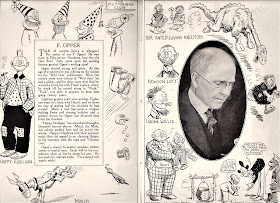 To launch a feature and attract clients, cartoonists and syndicates often put their best feet (or feet-ures) forward. Some elaborate brochures, die-cut, full color. Sometimes not. The disappointment of hopeful cartoonists is heart-wrenching when they see that a syndicate low-balled an introduction, in the old days, with Mimeographed press releases and a pocket-folder with newsprint clips.

As a comics editor at three comic-strip syndicates during my crowded little life, I was in a position to design promotion. And oversee promotion (or not – I remember how the News-Tribune Syndicate was so “over” Dick Tracy ca. 1975 that a desperate Chester Gould designed his own brochures; and Bob Reed and Jack Minch, Pres and Gen Mgr, respectively, ignored him). And appreciate archives of promotional materials when syndicates actually appreciate their “babies,” the comic strips. 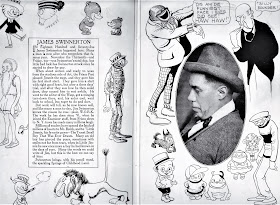 Illustrations here are from a promotional book, ca 1917, from the International Feature Service, one of the many and changing arms of the Hearst syndication empire. During the ‘teens, Hearst had so many features, and artists and writers, that in some cities they saturated the market… so became rivals to themselves. Alternate syndicates and features services were set up, to service smaller papers, or to prevent other syndicates from getting toeholds. Some time we shall tell that story.

In the meantime, here are some pages from that book, A Half Million Dollar Feature Service. I will share others, too, like a 1920s book devoted solely to the New York American (but featuring the national stars of King Features and other Hearst services) and stats about all of its NYC rivals left in the dust, circulation-wise. 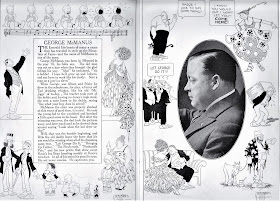 The only flaw in these pages – with special art drawn by the famous cartoonists – is the biographical and background text for each. Some idiot directed, or wrote, them as poems… and dopey ones at that. We could have learned all sorts of real data in those text-blocks.

Speaking of Blocks, the book has a photo and blurb about Rudolph Block, credited as “running the comic-strip department since 1897.” My research has shown that R F Outcault, Rudolph Dirks, F Opper, and even an early Frank Willard hated his guts. Some week, here, I will calmly eviscerate him. 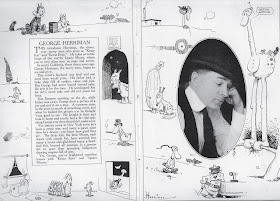 Two other notes: Ed Mack is included in this book, but 1917 is the year that he left Hearst to become Bud Fisher’s full-time ghost artist on Mutt and Jeff… for Hearst’s dreaded rival Joseph Pulitzer. And by the cover, you can see that this was the personal copy of Tom McNamara, creator of Us Boys and a pioneer Hollywood idea man. I don’t know if that is his signature (it came from the McNamara estate) but the paper-label T McN is in his hand.