This Is About Garge Herriman 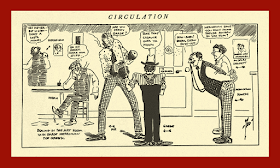 HERRIMAN. That’s the monicker you see signed to the Krazy Kat drawings. His first name is George, but the boys call him Garge, because that’s the way he pronounces it himself.
Now I’m not going to sit here and chuck the swell about that guy, I’m going to tell the truth.
Garge came from somewhere out west, we think it’s Los Angeles. He came here on a side door Pullman. Of course he wouldn’t want me to say so if he was here but it’s a fact just the same. He hangs around with a lot of painters, poets and authors these days, but when I first saw him he still had grease from the box cars on his pants.
He looked like a cross between Omar the tent maker and Nervy Nat when he eased into the art room of the N.Y. Journal 20 years ago. We didn’t know what he was so I named him The Greek and he still goes by that name.
Garge is short and wide like the door of a safe and as Johnny Dunn the announcer used to say of his wrestler, “He is strong. He can bend IRUN BARS WITH HIS NAKED HANDS.”
Garge also had a peculiar way of drawling. He is never in a rush as he drawls his words. He calls garden GORDON, he calls harness HORNESS, he calls cigars CIGORS and so on.
He ALWAYS wears a hat. Like Chaplin and his cane Garge is never without his skimmer. Hershfield says that he sleeps in it.
Garge has three hobbies. They are Arizona Indians, chili con carne and boxing gloves. He once knocked a guy cold on the elevated station at 42nd street, N.Y. City, and has been living on that rep ever since.
No one has ever found out what this knocked out gent did to Garge but it must have been something AWFUL because he has never once lost his temper with us and he has been through some tough afternoons and evenings. No matter what happens Garge is always the same. You can steal his pens but he only smiles. You can knock California but he merely smiles. You can cut up rubber in his tobacco pouch and he’ll smoke it just to let you laugh. He is like the old rye the guy told of. Not a harsh word in a whole barrel of it. There never was a smoother tempered gent. I’ll bet right now that if you asked Garge what the brick that hits Krazy Kat was made of he’d say VELVET. Then he’d add “You don’t think I’d want that poor lil cat to be hurt, do you?” Garge is a great reader and a great movie fan. His favorite author is CHORLES DICKENS and his favorite movie guy is CHORLIE CHAPLIN.
He will sit by the hour and talk of them. That is, he used to before the soda stores took the places once held by the Pilsner peddlers.
He brags about his favorites, Garge does, but never about himself.
The violet imitated Garge when it assumed that attitude of shyness.
He thinks he’s the rottenest artist that ever got behind a pen and no matter how many boosting letters he gets about his stuff he’s of the same opinion still. Of course WE KNOW BETTER.
Half the guys that never get a boosting letter admit that they’re good. Garge doesn’t and never will. He is always last. He laughs, though. Yes, he gets his giggles. When he laughs you’d think he had just taken a sniff of snuff. It isn’t a laugh, it’s a sort of internal explosion.