DAN LENO, the sporting cartoonist of the Bulletin, is in town en route north looking for a “vacation.” — ‘Sporting Cartoonist Here,’ in Press Democrat, July 14, 1910

OBSCURE CARTOONISTS. Online, you often see articles with additional titles like FORGOTTEN CARTOONIST. Usually, while obscure, comic strip historians have not completely forgotten those cartoonists. Dan Leno is a horse of a different color though, his short life in comics is completely unknown and information about his life and career are difficult to uncover. He was a derivative cartoonist, among others borrowing style and ideas from Tad Dorgan, George Herriman, Rube Goldberg and Harry Hershfield. The earliest mention of Dan Leno is in my opening quote, in which we learn he worked as a sporting cartoonist on the San Francisco Bulletin as early as 1910.
THE BEE. The Press Democrat, published out of Santa Rosa, California, noted on December 10, 1910, SATURDAY “BEE” TO BE PUBLISHED HERE. The Bee was to be published by Billy Silver for the Press Democrat as an 8-page weekly, colored in pink and green, with cartoons by Dan Leno and Louis Breton. Charles Mansfield would provide illustrations. All three men were from the Bulletin’s staff.
LOS ANGELES HERALD.  Dan Leno’s first Los Angeles Herald cartoon — contemporary with cartoonists George Herriman, Gus Mager, Harry Hershfield, Tom McNamara, and Hal Coffman — appeared on Dec 2, 1911, on the sporting page. The Herald later listed a range of titles, ‘A bas, as the French Say,’ ‘Mr. Bonehead Buys an Auto,’ and series with titles like ‘Such: Can You Beat It ?,’ ‘Old Ill Wind,’ and ‘Such Is Life.’ His last cartoon appeared on February 28, 1913. These last few cartoons were done in a wispy labored style, perhaps the result of the unspecified disease which sent him north to Acme, Alberta, where he died around March 21, 1913.

ROSINA LENO.  A woman living in Acme, named Rosina Leno, married a man named Jacob Bitz in 1885 (HERE) so it is possible that Dan Leno was her relative and possibly born in Alberta, Canada. And that is all that is known at present about Dan Leno, who according to his obituary was famous for his sporting page cartoons long before he joined the staff of the Los Angeles Herald.
—


NOTE. This is of course not about British comedian ‘Dan Leno’ (real name: George Wild Galvin, 1860-1904) who toured the US in 1897 as ‘The Funniest Man On Earth’ and licensed a London comic weekly to use his name in the title, Dan Leno’s Comic Journal (1898, subtitled: ‘One touch of Leno makes the whole world grin’). 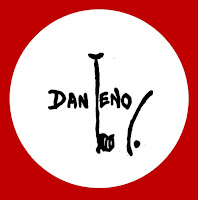