I Thought of a Tramp — The birth of Happy Hooligan 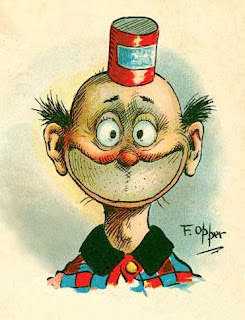 “The awful part of this work is its speed. (…) It almost seems to me now like shoveling coal into a furnace, or pouring water into a bucket without a bottom. It just goes on and on.” —lF.lOpper, 1930

“MR. OPPER has drawn Happy Hooligan for the past 30 years (1900-30), and a daily cartoon, when he has the time and inclination to do so.” Frederick Burr Opper was born in Ohio in 1857, in Madison, a small town in the middle of the state. He never went to college and only attended school until he was fourteen.


“First I went to work in the little general store there, and after that on the village newspaper. No, not to draw or write, just a general factotum all over the place. When I had been there about a year and a half, I decided to come to New York, and took a job in a dry goods store doing a little of everything, writing price tags and such things. All this time I had an idea of selling my drawings to the comic papers.”

FOR THREE YEARS, in between his other work, he sold cartoons and comic pictures to Frank Leslie, who eventually took him on his staff. He then went to Puck for eighteen years, leaving there to work for Mr. Hearst.


“It happened that they wanted a new series of comics, and I set about inventing one. I thought of a tramp. Tramps were not so very new; there had been all kinds of tramps, so I decided to make him a little different by putting a can on his head. What gave me the idea was that at that time all the saloons put their empty kegs in the streets for the breweries to pick up and refill. The tramps would hang empty tomato cans around their neck, go to these kegs and tip the remains of the beer from the empty barrel into their cans.”

“Besides the comic strip Mr. Opper does several cartoons a week, more or less of a political nature, for the daily papers. In order to do this he has to do a great deal of newspaper reading, so as to be absolutely up to date on current events. (…) His only relaxation? Sketching! He likes to go to Europe, preferably the little English villages, and sketch with a soft pencil and a sketch book, even as you and I. (…) Incidentally, he is much more proud of his sketch book than his comic strip. He has two children and six grandchildren.”

HE MOVED with his family to an old-fashioned home in New Rochelle in 1916. His workroom is the sun parlor on the first floor. “Before that we lived near Stamford, Conn. We had a great big old-fashioned farmhouse a hundred and fifty years old, although I’ve never farmed in my life.” He sold their farm and part of the sales agreement is the present house in New Rochelle. They lived on 78th street in New York at first, with the house in New Rochelle used as a Summer place. At the time of this article and interview, F. Opper is seventy-three years of age.


“Comics have become a great industry. Years ago, when I was first in the game, there were only three or four of them. Every city in the country now has its comic artist, and also buys from feature syndicates. The business is getting bigger and bigger, until I do not see how it can grow anymore without toppling over.”

NOTE. In this article the ‘32 years’ of Happy Hooligan has been changed into a more correct ‘30 years’ by Yesterday’s Papers. Our lead picture was first published on a 1904 Valentine’s Greetings postcard.