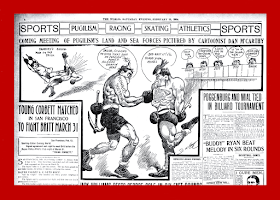 DAN M’CARTHY, THE CARTOONIST, DEAD
—
He Had Worked on Many Papers and founded a School of Caricature

New York, Feb. 17, 1905 — Daniel H. M’Carthy, one of the best known newspaper artists and caricaturists in the country died yesterday after a short illness. He was born in Syracuse 35 years ago. M’Carthy came to New York about 15 years ago and began to make drawings for the Evening Telegram. he was called to Paris by James Gordon Bennett and remained for a time with the Paris Herald. When the Recorder started he returned to New York and drew pictures for that paper for five years. He then went to the World and remained there until four years ago when he founded the National School of Caricature. He was at the head of this concern at the time of his death. [From: Binghampton Press]