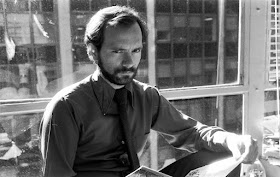 On a Spring week of 1978 I started work at Marvel Comics as Editor of the magazine line. Frankly I don’t remember exactly if it was Spring or not. And I think the year was 1978. And my title might have been something like Magazines and Special Projects, because I started immediately working on new full-color Super Specials, movie adaptations, and the Hulk color magazine.

When I forgot details like that, I used to call Mark Gruenwald, who knew more of the Marvel canon than Stan Lee. And than me, about my own career.

One of the joys of my public service at Marvel was the opportunity to, indeed, work on special as well as Special Projects. The three-issue Weirdworld series, with three-page foldout pages of beautiful art by John Buscema. And bringing in friends from my years in the syndicated newspaper-strip field; and European comic artists, from years of travel to comic conventions and book fairs. And starting Epic Illustrated magazine, with the first cover painted by Frank Frazetta.

In a lot of these endeavors I was given latitude in many ways, even to engineer the first major comic-book company’s formal presence at San Diego Comicon; and being sent on a talent hunt to Europe for Epic. On everything, however, I brainstormed with Mark Gruenwald first. It was fun to do so… and he knew Marvel in all aspects better than anybody. 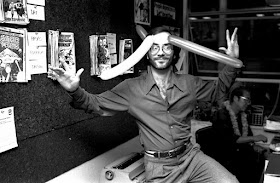 Work – excuse me, “work” – at Marvel was also frequently like a frat party. We did our jobs, we met deadlines, we sometimes made history. But funny phone calls, practical jokes, bogus memos, absurd nicknames (not Stan’s baptismal monikers), vocal impressions and caricatures… all were no less, and sometimes more, important than our job descriptions.

When I found slices of baloney in my desk drawer (I am afraid weeks after their placement), I knew it was by the grace of Mark Gruenwald. When someone let loose with a pun better than any of mine, it was always… Mark Gruenwald.

Mark and I and Blinky Bob Hall (not his Marvel nickname, but… well, Bob blinked a lot) all started at Marvel on the same day, introduced to the suits as well as to the bullpen, and going through turns with the HR person Dorothy Mucous (actually chain-smoking Dorothy Marcus; not her official Marvel nickname, but… you get the idea). 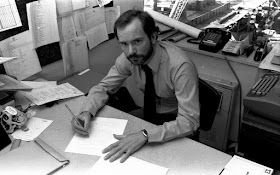 I recall Mark Gruenwald today because this week upcoming marks (ha) the 24th year since he died. “Anniversary” has inappropriate connotations. It still shocks his friends, who are many. There is a sense – stick with me, true-believer wordsmiths – that Mark didn’t die; he lived. A fount of ideas, concepts, what-ifs, trivia, and a quiet but vibrant joy of life, of creativity. Then he, well, stopped living. It was a plot twist he, as editor or writer, probably would have rejected.

Marvel fans know better than I knew, or know, what a keeper of the keys he was about the Universe’s history. But more important, he had a perfect sense of where its future would be, or should be. I used to kid Mark that not only could he answer my challenge about the color of some villain’s costume in issue Number 9 or Number 17 of this-or-that; but he probably could tell me what color shirts Steve or Jack wore when they drew those pages.

“Try me,” he challenged.

I never dared to.

If he won the challenge, I probably would have had to give him a Get-Out-Of-Baloney-Slice-Jail-Free card. That was too high a price in those Happy and Crowded Days. 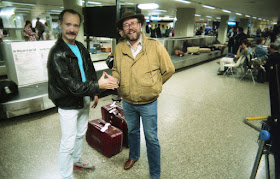 One year, around 1990 I think, Mark Gruenwald attended the Frankfurt Book Fair in Germany, on behalf (or even befull) of Marvel. I had a booth, promoting my vintage comic-strip reprints, and brought my ace assistant at the time, mutual friend of Gruenny and me – Eliot Brown. We met by chance at the luggage carousel, or as the Germans call it, der Baggagischeferdamtautomatikerwagen.