The Lifelong Magic of Cartoons.
By Rick Marschall 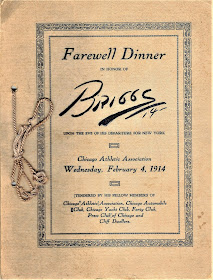 These are crazy times. Maybe all times are crazy, in their own way. And when they are not, some of us make our own craziness. This is not bad, just… crazy. And in the words of the Waylon Jennings song, I’ve always been crazy; it keeps me from going insane. And my friends have always lived under that sign.

But these times, maybe they have rushed to insane already, with more of the same on the near horizon. “Things” are busting up relationships, pulling families apart, transforming warm friends into deadly enemies. A year ago, sad people lamented that family gatherings have become dangerous places, but today a casual chat can be a trigger for raw hatred. Social conventions used to avoid the unpleasant; now some people itch for a fight at every opportunity. 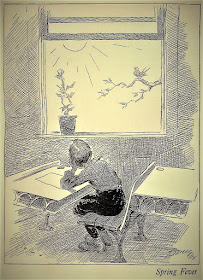 These conversations are not gratuitous, nor requiring your agreement: just my observations. Why here? To address today’s memories, I want a context. Through mankind’s history, art has served many functions, among them being a cutting edge of change, or the desire for change. Just as often, a retreat from contemporary strife – to a better time; a cherished time of memory or myth; a spiritual alternative, or a fantasy; a wholesome and instructive diversion.

Cartoon art represents that, as well. Of course. To see it that way requires different glasses, so to speak, but future generations will regard our cartoon culture to see what we laughed at, what we dreamed of, what we loved and hated, what we feared…

I hate these times, at times. I hate the losses we suffer, listed above, because society has changed rules, and the scenery, while we looked away. When my living was drawing political cartoons, I loved ranting on paper, and if readers disliked the rants they could write letters that I would read only in subsequent days. Insulated bomb-tossing. But I was frustrated that my cartoons didn’t change millions of minds. And sometimes I got sick of the whole game. As Harold Gray wrote to Al Capp (in a letter reproduced in this space last week), “But it’s a living, eh?”

For all of our enthusiasms and passion, how often do you grow weary of them? Does that part of life sometime beat you down? I didn’t grow sick enough of drawing political cartoons at times, to contemplate a switch to selling aluminum siding, no. Do I sometimes get a little tired of cartoons and comics, of old paper and vintage journals? 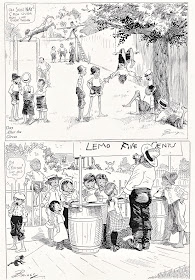 But a few things, the work of a few cartoonists, brings me back. I have often fallen in love, anew, with the art form of the comic strip; its great examples, and its great potential. In love, all over again, with the geniuses who start with blank paper and share their brains, creating worlds and challenging ours. Enthusiastic, as a kid would be (as I was) (and am, when I need to be) at the magic of cartoons and comics.

So this week I will share a little bit of the work of the magician whose work never fails to snap me back to sanity (insanity, whatever) and back into that Crowded Life of mine. Clare Briggs.

Briggs did not imagine great futuristic vistas, like Alex Raymond; but could create gentle fantasies like Winsor McCay (in his Danny Dreamer). He was a great sports cartoonist but left to draw humor panels. Of thousands of cartoons, he created no continuing characters except a generic kid, Skin-nay. And “Mr and Mrs,” whose invariable bickering was somehow gentle – accessible to everyday readers. No, Briggs’s continuing character was the Human Race. 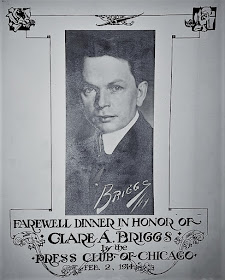 He was called the Father of the Human-Interest Cartoon, and of many in that genre – TAD Dorgan, H T Webster, Gluyas Williams, Gaar Williams, J R Williams, Frank Beck – he was the best. Briggs seldom reached for a belly laugh; and sometimes not for a laugh at all. His kid cartoons were nostalgic for a time that often still existed: his intention was for readers to remember, or share memories, of their cherished roots.

With such a rare and, yes, magical formula he touched nerves with readers. To like Briggs – and America did; his move from the Chicago Tribune to the New York Tribune was a national event – was to like everyday America. Oftentimes rural America. To trust your values and feel secure. To trust Briggs and the magic of his substantial concepts and his casual penwork.

I love all his work (can you tell?) but perhaps my favorite series is the occasional six- or eight-panel strips under the running head Real Folks At Home. Never a joke or a punchline or a laugh at the end, just plumbers and waitresses and salesmen and teachers going home at the end of the day… sharing the days (usually unremarkable) events… reflecting – not about Life, but about their lives. You don’t have to be a plumber or a waitress to like these people; or to love Briggs, who could translate the warp and woof of everyday life for us so well. The magic of cartoons.

Voila. Some moments, or hours, or a quiet afternoon, with Clare Briggs, and I am back to loving cartoons and comics again, more than ever. 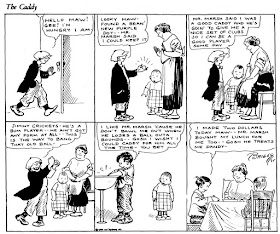 Do we all have an artist, or a body of work, where we can find the same magic?

The illustrations this week will be less my favorites Briggs cartoons (the books of the book might not hold them) but attestation of the warm regard of his fellow cartoonists. I mentioned that he was lured from one Tribune to another (no relation) and it was a major news event. The year was 1914, and will share some of the tributes:

There was a fancy Farewell Dinner in Chicago, and celebrities including writers and, significantly, rival cartoonists staged the dinner, and drew many fond good-bye drawings. I will also share some of the “Welcome to New York” drawings from cartoonists who realized they would have their superior in their midst. 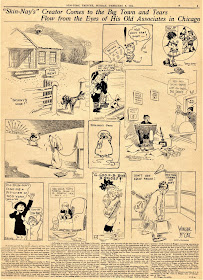 You might not share my gushing enthusiasm for Clare Briggs – in which case I challenge you to a friendly duel, water pistols filled with ink at 20 paces – but, boy, do I hope that you all have at least one artist who can re-kindle your love of cartoons and comics when needed.

… and, in that larger landscape I mentioned at the top, one factor, one lifelong hope, one cherished life value, that pulls you back from despair and retreat in these rotten times. When you want them to be, these can be the Days of Real Sport.